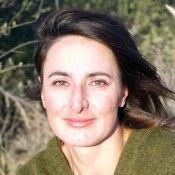 V. Penelope Pelizzon was born in 1967 in Massachusetts. Her second poetry collection, Whose Flesh is Flame, Whose Bone is Time, which was a finalist for the eighth annual Anthony hecht Poetry Prize, has just been published by Waywiser. Her first collection, Nostos (Ohio University Press, 2000), won the Hollis Summers Prize and the Poetry Society of America’s Norma Farber First Book Award. She is also the co-author of Tabloid, Inc: Crimes, Newspapers, Narratives (Ohio State University Press, 2010) a study of the relations among American sensation journalism, photography, and film from 1927-1958. Her poetry, essays, criticism, and reviews have appeared in journals, including Poetry, FIELD, The Hudson Review, The Kenyon Review, The Nation, Fourth Genre, The Yale Journal of Criticism and The British Journal of Aesthetics, while her recent translations appear in The FSG Book of Twentieth-Century Italian Poetry and Poetry. Pelizzon’s writing has received several awards, including a 2012 Amy Lowell Traveling Scholarship, the 2012 Center for Book Arts chapbook award, a Lannan Foundation Writing Residency Fellowship, and the “Discovery”/ The Nation Award. She is an Associate Professor of English at the University of Connecticut. A diplomat’s spouse, she navigates between postings abroad and her current position as Associate Professor of English at the University of Connecticut.