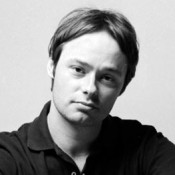 Austin Allen was born in Middletown, CT in 1984. He has worked as a book editor, educator, journalist, and digital archivist. His poetry has appeared widely in print and online, and his essays appear frequently via the Poetry Foundation website. A graduate of the Johns Hopkins Writing Seminars, he currently lives in Baltimore and teaches as a lecturer in creative writing at Johns Hopkins University.

Two poems from Austin Allen’s Pleasures of the Game

We have a problem.
Are we forgetting something?
The moon climbs,
and somehow we can’t
quite seem to place the face.
And this happens sometimes.

We have a problem:
the moon falls
just out of reach, between the hills,
like one of the golf balls
from the old Apollo mission.
Did we leave something behind?

We seem to recall—there was a flag,
artificially stiffened
because there was no wind.
And a little plaque signed
by the president, Nixon.
In five o’ clock shadow,
he lost the debate
to the younger fellow,
but now the harsher face is on the rise.

Are we forgetting something?
Did we leave someone behind?
One of the astronauts, the handsome fellow—
Apollo?
No, that was the name of the mission.
The name on the little plaque had to be Nixon.
And quarters, halves, bits of loose change
wink—sink between the cushions
of the distant hills.

Consider my face.
Is it handsomely desperate
or just desperately handsome?
Is each clutched hair in place?

Notice the crimson flush
upon each cheek.
Is that a fever’s rose
or rouge, do you suppose?
If rouge, would my mystique
be heightened? Would you blush?

Such arrogance
as I must have to boast,
“I am the most
arrogant man in France”:

is it not also yours?
Who but yourself, indulging,
summons the force
that draws me in, distorts
my eyes, my ego bulging
toward the terror’s source—

which (it could not be clearer)
is a mirror?