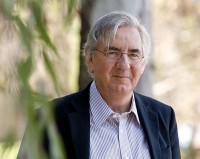 Dick Davis was born in Portsmouth, England, in 1945, and educated at the universities of Cambridge (where he received a BA and an MA in English Literature) and Manchester (where he received a PhD in Medieval Persian Literature). He has taught at the universities of Tehran, Durham, Newcastle, and California, Santa Barbara. Currently he is Professor of Persian and Chair of the Department of Near Eastern Languages and Cultures at Ohio State University.
He lived for eight years in Iran, as well as for periods in Greece and Italy. During his time in Iran he met Afkham Darbandi and they married in 1974. They have two daughters, Mariam, born in 1982, and Mehri, born in 1984.
From about 1978 to 1984 Davis worked as a freelance writer and, during this period, published around a hundred and fifty articles and reviews in the British national press. As author, translator or editor, he has produced twenty-one books. In addition to his academic works he has published translations from Italian prose and from both prose and verse in Persian, not to mention his own books of poetry.
Davis has received a number of awards and honours. In 1979, he received an award from The Arts Council of Great Britain to write a book on Yvor Winters. He was elected a Fellow of the Royal Society of Literature in 1981. In the same year he received an award from The British Institute of Persian Studies to translate Attar’s Manteq alTayr. Also in this year he received for his book of poems, Seeing the World, the Heinemann Award for ‘a work of outstanding literary merit’.
He was given a two-year scholarship from the University of Manchester to conduct research on the Shahnameh of Ferdowsi and this study led to the PhD mentioned above. During 1987-88 he had a Fulbright Travel Scholarship at the University of California, Santa Barbara.
His selected poems, Devices and Desires: New and Selected Poems 1967-1987 was chosen by both The Times and the Daily Telegraph as a Book of the Year in 1989. In this year he was also given a grant in aid of publication award from The Persian Heritage Foundation for Epic and Sedition: the Case of Ferdowsi’s Shahnameh. In 1993 he received an Ingram Merrill Prize for ‘excellence in poetry’ for A Kind of Love, the revised and expanded US edition of Devices and Desires. The Poetry Society of Great Britain awarded him a recommendation for translation for Medieval Persian Epigrams, which appeared in 1995. He was a Guggenheim Fellow for 1999-2000. The American Institute of Iranian Studies awarded him its Translation Prize for My Uncle Napoleon in 2000. These honours were followed by the Encyclopaedia Iranica Prize for Services to Persian Poetry in 2001, the year The American Institute of Iranian Studies again awarded him a translation prize, this time shared with his wife Afkham Darbandi, for The Conference of the Birds. His work, in 2002, to translate Volume III of stories from the Shahnameh of Ferdowsi, was supported by the National Endowment for the Humanities Award. His book of verse, Belonging, was chosen as a Book of the Year in The Economist, in 2002.
As a poet, an early passion of Davis’s – and one that has not been lost – was for Edward Fitzgerald’s Rubáiyát of Omar Khayyám. He uses the Fitzgerald stanza in ‘A Letter to Omar’, a homage to the poet, published in Devices and Desires. In fact, he went on to edit a new edition, published in 1989. Such an enthusiasm must have influenced his preference for the expressive qualities of traditional forms and metres that characterize his verse. In his first collection, In the Distance, he uses metre and rhyme not in a narrowly old-fashioned formal way but develops with them well-made thoughtful poems that move with a quietly spoken but effective perception. His second book of verse, Seeing the World, as mentioned above, received the Royal Society of Literature Award in 1981. The Covenant was published in 1984. Touchwood: Poems 1991-1994 appeared in 1996, along with Borrowed Ware: Medieval Persian Epigrams, a verse translation and scholarly edition with introduction and head-notes. Belonging appeared in the US and then in the UK in 2002, and Richard Wilbur wrote of it: ‘I began by jotting down the titles of the best poems, but gave that up when it seemed I might choose them all.’ Davis’s most recent collection, published in July 2006, is A Trick of Sunlight, which Booklist’s reviewer called ‘one of the most rereadable books of poems of recent years’.