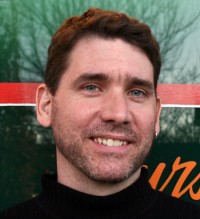 Geoffrey Brock was born in Atlanta and grew up in Tallahassee, Florida. He received a PhD in comparative literature from the University of Pennsylvania, an MFA in poetry from the University of Florida, and was a Wallace Stegner fellow in poetry at Stanford. His first book, Weighing Light, received the New Criterion Poetry Prize and his poems and translations have appeared in journals including Poetry, The New England Review, Subtropics, Cincinnati Review, and Hudson Review, and in anthologies such as The Swallow Anthology of New American Poets, Best American Poetry 2007, and Pushcart Prize XXXIV. He has received fellowships from the NEA, The Academy of American Poets, The Cullman Center for Scholars & Writers at the New York Public Library, and the Guggenheim Foundation. Brock is also the editor of The FSG Book of 20th-Century Italian Poetry and the translator of Cesare Pavese’s Disaffections: Complete Poems 1930-1950. He teaches at the University of Arkansas in Fayetteville.