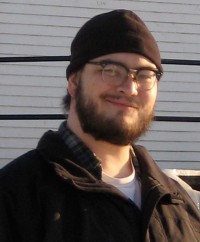 Isaac Cates is Assistant Professor of English and Director of the Poetry Center at the C. W. Post campus of Long Island University. He was born in 1971 in Germany, and spent most of his youth on a small ranch south of Austin, Texas. He holds degrees from the University of Texas at Austin, Johns Hopkins University, and Yale University. He has published poems in Southwest Review and Cumberland Poetry Review, and essays on contemporary poetry in Literary Imagination and in several handbooks and encyclopedias. With Mike Wenthe he has also written and drawn a series of comic books and short pieces that have appeared in Other and Backwards City Review. Since the summer of 1998 he has written more than fourteen thousand postcards. He is currently writing a book on the graphic novel for Yale University Press. He lives in New Haven, Connecticut.