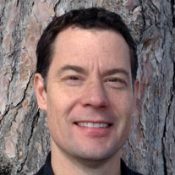 Mike White was born in 1971 and grew up in Montreal, Canada. He received a B.A. in English from the University of Toronto, an M.A. in English from McGill University, and a Ph.D. in Literature and Creative Writing from the University of Utah. As a graduate student at Utah, White served as editor-in-chief of Quarterly West, and was co-winner of the Academy of American Poets Larry Levis Prize in 2006. His first book, How to Make a Bird with Two Hands (Word Works, 2012) was awarded the Washington Prize. His poems have been nominated on six occasions for the Pushcart Prize, and have appeared in magazines including The New Republic, Poetry, Ploughshares, The Yale Review, The Threepenny Review, The Iowa Review, Denver Quarterly, AGNI Online, and FIELD. His work can also be found on the Poetry Daily and Verse Daily websites. He currently lives in Salt Lake City where he serves as a faculty member at the University of Utah.

Two poems from Mike White’s Addendum to a Miracle

Addendum to a Miracle

just one
irrefutable fish, size
of a single loaf of bread,

and the mouths of the multitude
watered, and
the gills of the dying fish
fanned the poison air.

and a rationale
for the same,