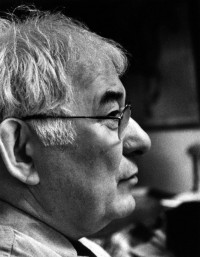 Seamus Heaney was born on April 13th, 1939, the first child of Patrick and Margaret Kathleen Heaney (née McCann), who then lived on a fifty-acre farm called Mossbawn, in the townland of Tamniarn, County Derry, Northern Ireland. Heaney was the eldest of nine children – he had two sisters and six brothers – and as such might have been expected to follow in his father’s footsteps, becoming a farmer and cattle dealer. When he was still quite young, however, it was recognized that this was unlikely to happen, for after attending the local primary school in Anahorish, he won a scholarship to St Columb’s College in Londonderry, a school which, as he himself put it somewhat later, ‘was very much geared to getting you through the exams, very academically pitched.’ Heaney did well, and in 1957 he entered Queen’s University, Belfast, where he had been offered another scholarship, this time to study for a degree in English Language and Literature. It was while studying at Queen’s that he started to write, and between 1959 and 1961 – the year he graduated with first-class honours – the university magazines Q and Gorgon published a handful of his poems as well as a short story. They appeared under the pen name of Incertus (i.e. Uncertain).