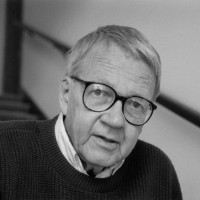 Donald Justice was born in Miami, Florida, on August 12th 1925, the only child of Vasco and Mary Ethel Justice (née Cook). He attended Allapattah Elementary School, Andrew Jackson High School and the Senior High School in Miami. Then, in the autumn of 1942, he enrolled for a BA in Music at the University of Miami, where he studied for a time with the composer Carl Ruggles. At a certain point, however, Justice decided that he might have more talent as a writer than a composer, and when he took his degree, in 1945, it was not in Music but English.

After a year spent working at odd jobs in New York, Justice entered the University of North Carolina – the University of North Carolina, Chapel Hill, as it is now known – to study for an MA. There he got to know a number of other people who would go on to make their mark as writers, amongst them the novelist Richard Stern, the poet Edgar Bowers, and the short story writer, Jean Ross, whom he married in 1947, the year he took his MA.

Justice accepted a one-year appointment instructing in English at the University of Miami. Then, with the encouragement of Edgar Bowers, who had gone there the year before, he took up the offer of a place to study for a PhD at Stanford University in California, where he hoped to work under the supervision of Yvor Winters. Unfortunately, the head of department refused to allow this, and, mindful of Justice’s teaching load, insisted that he took only one course per semester, thereby condemning him to very slow progress. Frustrated, Justice left Stanford and went back to Florida, where he resumed the life of an instructor at the University of Miami.

Early in 1951, the Pandanus Press published a small chapbook of Justice’s work, The Old Bachelor and Other Poems. But if the occasion was cause for celebration, it will have been overshadowed by the announcement that the university was letting all of its English instructors go.

Out of work, and unsure what to do next, Justice acted on the advice of friends and applied to study for the PhD in Creative Writing being offered by the Iowa Writer’s Workshop, the oldest institution of its kind in America, founded by Paul Engle in 1937. His application was successful, and in the spring of 1952 Justice joined one of the most distinguished classes ever to pass through the Workshop, his fellow students including Jane Cooper, Henri Coulette, Robert Dana, William Dickey, Philip Levine, W.D. Snodgrass and William Stafford.

In the spring of 1954, just two years after his arrival, Justice obtained his PhD, and was promptly awarded a Rockefeller Foundation Fellowship in poetry, which made it possible for him to travel to Europe for the first time. After his return, he spent two years as an assistant professor, one at the University of Missouri at Columbia, the other at Hamline University, St Paul, Minnesota. Then, in 1957, he went back to the Iowa Writers' Workshop, where he had agreed to take over some of his teaching while Engle was away on leave. This was to have been a temporary appointment, but when Engle returned, he was asked to stay on, and he remained at the Workshop for over ten years.

Justice had been publishing poems in many of the country's leading journals – amongst them, Poetry, The New Yorker, Harper's, The Hudson Review, and The Paris Review – and he had been publishing short stories as well – two had been included in O. Henry Prize Stories annual collections – but it wasn't until 1960, when he was thirty-five years old, that Wesleyan University Press published his first full collection, The Summer Anniversaries. It was very well received: 'Mr Justice is an accomplished writer,' wrote Howard Nemerov, 'whose skill is consistently subordinated to an attitude at once serious and unpretentious. Although his manner is not yet fully disengaged from that of certain modern masters, whom he occasionally echoes, his own way of doing things does in general come through, a voice distinct although very quiet, in poems that are delicate and brave among their nostalgias.' In competition with books submitted by forty-seven other publishers, The Summer Anniversaries was chosen by the Academy of American Poets as the Lamont Poetry Selection for 1959.

Two small press publications came out in the next few years – A Local Storm in 1963 and Three Poems in 1966 – and so did two edited volumes – The Collected Poems of Weldon Kees in 1960 and Contemporary French Poetry in 1965 – and then, in 1967, the year he left the Iowa Writers' Workshop, Justice's second full collection was published. Night Light was a very different book from its predecessor, but although it drew some negative reviews – William H. Pritchard summed up his reaction by saying that the book was 'almost wholly about literature, often not very exciting literature' – and some of the positive reviews were lazily formulated, Justice will have found the general tenor of the pieces reassuring: 'This is a book to be grateful for,' wrote one reviewer, and most of the others were clearly in agreement.

Justice left the Iowa Writers' Workshop in order to take up an Associate Professorship at Syracuse University in New York. The following year – a year in which he was awarded a National Endowment for the Arts fellowship in poetry, and gave the Elliston lectures at the University of Cincinnati – he was appointed full professor. However, Justice remained at Syracuse University for only three years, accepting a one-year appointment at the University of California at Irvine in 1970, and then, in the autumn of 1971, going back for a third time to Iowa.

Two more small press publications came out in the early 1970s – Sixteen Poems in 1970 and From a Notebook in 1972. These were followed by Justice's third full collection, Departures, which was published in 1973, and was another critical success. Irvin Ehrenpreis described its author as a 'profoundly gifted' poet. Richard Howard was no less enthusiastic: '[T]his little book [contains] some of the most assured, elegant and heartbreaking ... verse in our literature so far.' Departures was nominated for the 1973 National Book Award.

Justice's Selected Poems was published in 1979, and its jacket bore a ringing endorsement from Anthony Hecht: 'Many admiring poets and a few perceptive critics (Paul Fussell, Jr among them) have paid careful, even studious attention to Donald Justice's poetic skill, which seems able to accomplish anything with an ease that would be almost swagger if it were not so modest of intention. He is, among other things, the supreme heir of Wallace Stevens. His brilliance is never at the service merely of flash and display; it is always subservient to experienced truth, to accuracy, to Justice, the ancient virtue as well as the personal signature. He is one of our finest poets.' Not all of the reviewers were so well-disposed, however. Calvin Bedient described Justice as 'an uncertain talent that has not been turned to much account'; Gerald Burns said that the volume 'reads like a very thin Tennessee Williams'; and Alan Hollinghurst said that the poems, 'formal but fatigués ... create the impression of getting great job satisfaction without actually doing much work.' Still, those who felt like Bedient, Burns and Hollinghurst were in a small minority, and Justice's Selected Poems was awarded the Pulitzer Prize for poetry in 1980.

In 1982 Justice returned to the state of his birth to take up a professorship at the University of Florida, Gainsville. Two years later he published Platonic Scripts, which gathered a number of his critical essays and a handful of the interviews he had given since the mid-1960s. Then, in 1987, he published his next full collection, The Sunset Maker, a book whose contents were well described by his old friend Richard Stern in a review for The Chicago Tribune: 'Poems built so finely out of such intricate emotional music shift in the mind from reading. They are the products, if not the barometer, of an extraordinary temperament coupled with enormous verbal and rhythmic skill. No poem here could have been written by anyone but Donald Justice. This is his world, faintly tropical, faintly melancholy, musical, affectionate, a fixity of evanescence. Beautiful as little else.'

In 1991, by which time he had written the libretto for Edwin London's opera, The Death of Lincoln, and had co-edited The Collected Poems of Henri Coulette, Justice was awarded the Bollingen Prize, in recognition of a lifetime's achievement in poetry.

The following year, disenchanted with Florida, and disaffected with the university, Justice retired and moved back to Iowa City. After that, he has published a number of books: A Donald Justice Reader (containing poems, a memoir, short stories and critical essays) appeared in 1992, New and Selected Poems and Banjo Dog in 1995, Oblivion (containing critical essays, appreciations and extracts from notebooks) and Orpheus Hesitated Beside the Black River (an English version of his New and Selected Poems) in 1998. He also co-edited The Comma After Love: Selected Poems of Raeburn Miller (1994) and Joe Bolton's The Last Nostalgia: Poems 1982-1990 (1999).

In 1997, Justice was elected a chancellor of the Academy of American Poets.

In the last few months of his life, Donald Justice was invited to be Poet Laureate of the United States but had to decline because of ill-health. He died on August 6th 2004, and is survived by his wife Jean Ross Justice and their son Nathaniel.