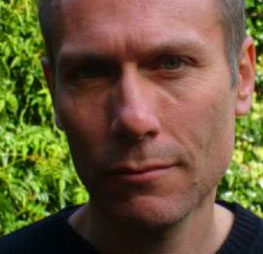 Mark Ford was born in Nairobi, Kenya in 1962, and attended schools in Lagos, Chicago, Colombo, and London. He has a B.A. and a D. Phil. from Oxford University, where he specialized in American poetry. From 1991-93 he was Visiting Lecturer at Kyoto University in Japan. He now teaches in the English Department at University College London, where he is a Professor. He has written widely on 19th and 20th century British and American literature. His first collection of poetry, Landlocked, was published by Chatto & Windus in 1992, and his second, Soft Sift, by Faber & Faber in 2001 and by Harcourt Brace in 2003. He has also written a critical biography of the French poet, playwright and novelist, Raymond Roussel (Raymond Roussel and the Republic of Dreams), published by Faber & Faber in 2000, by Cornell University Press in 2001, and by Ediciones Siruela in a Spanish translation in 2004. He is a regular contributor to the New York Review of Books, the Times Literary Supplement, and the London Review of Books. Recent publications include an edition of the poetry of Frank O’Hara (Why I Am Not a Painter and other poems (Carcanet, 2003), two anthologies of the work of poets associated with the New York School (The New York Poets and The New York Poets II, Carcanet, 2004, 2005), and a book-length interview with John Ashbery (John Ashbery in Conversation with Mark Ford) published by Between the Lines in 2003